Before his voiceover days, Cameron spent a decade in the Air Force – first as maintenance crew chief working on C-130 cargo aircraft, and then as a weather forecaster. Providing weather briefings to pilots and base commanders was a different but effective experience in VO presentations and broadcasts. 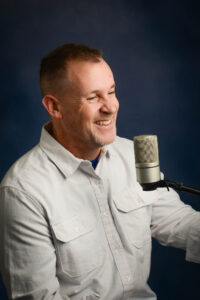 After a move back to his home state of New Hampshire, he worked as a radio meteorologist, providing radio forecasts for stations nationwide, including the Caribbean, and was the afternoon radio voice for Bloomberg Radio in NYC. A transition to voiceovers followed and he eventually voiced hundreds of projects ranging from radio/tv commercials to  corporate videos, e-learning projects, promos, and more.

Cameron still lives in New Hampshire with his wife and two boys where they grew into a hockey family watching his oldest play, while Cameron helped coach. He also enjoys New Hampshire mountain hiking and scenic motorcycle rides. When he is not behind a microphone, Cameron can be found behind a drum set playing for a few local NH bands.  And he loves finishing a day of grubby yardwork with some charcoal grilling on the deck!

Thanks to Carlen Images for the pictures and Voice Actor Websites for building my site.